Read how faith and first responders saved trapped kids at camp in the Whittier Fire in this article Written by R.W. Dellinger in Angelus News. 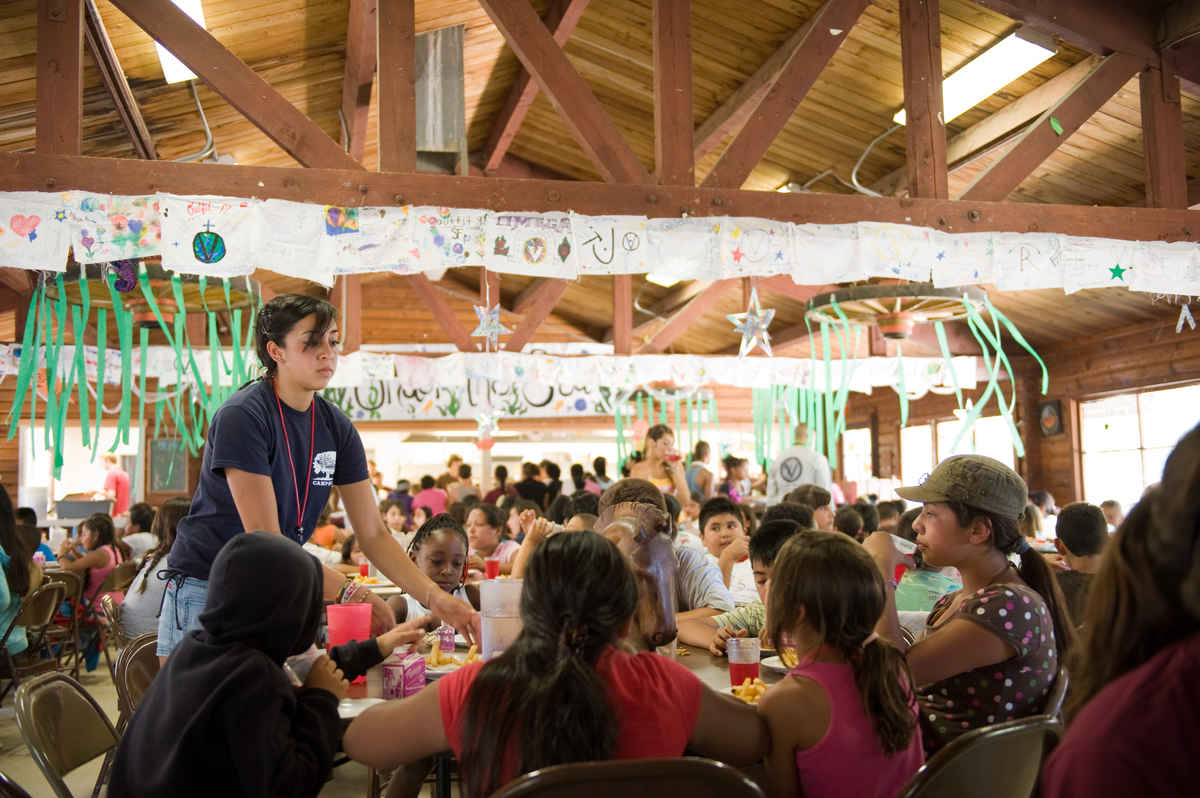 The dining hall, or chuck house, where campers “sheltered in place” while the fire burned near the Circle V Ranch Camp. (ST. VINCENT DE PAUL SOCIETY)

With all the wildfire conflagrations that have burned across California over the past two years, many of the stories of heroism and danger that came with them have been overlooked or forgotten.

One of them was the dramatic rescue of 58 children and 24 staff members trapped at the Circle V Ranch Camp & Retreat Center on July 8, 2017, in the Los Padres National Forest across from Lake Cachuma.

On that hot, dry summer day, the “Whittier Fire” broke out about 1 p.m. near the lake. Thirty campers and 12 adults were able to evacuate down the 1 1/2-mile ruddy road to Highway 154. But blocked by a fallen tree, the rest had to turn their vehicles around and hurry back up to camp.

There, according to an emergency plan, they “sheltered in place” inside the dining lodge, commonly called the “chuck house.”

For more than three hours they stayed there — eating snacks, singing songs, playing games, and watching videos. Counselors and CILTS (Campers In Leadership Training, ages 14 to 17) did about everything they could to take younger campers’ minds off the fire while it creeped up the Live Oak and Pine canyons below them.

And by 5:40 p.m., they reached the evacuation point at Highway 154. Two school buses from the Santa Ynez Band of Chumash Indians drove them to Old Mission Santa Ines in Solvang, where they dined on pizza until parents and friends came to take them home. 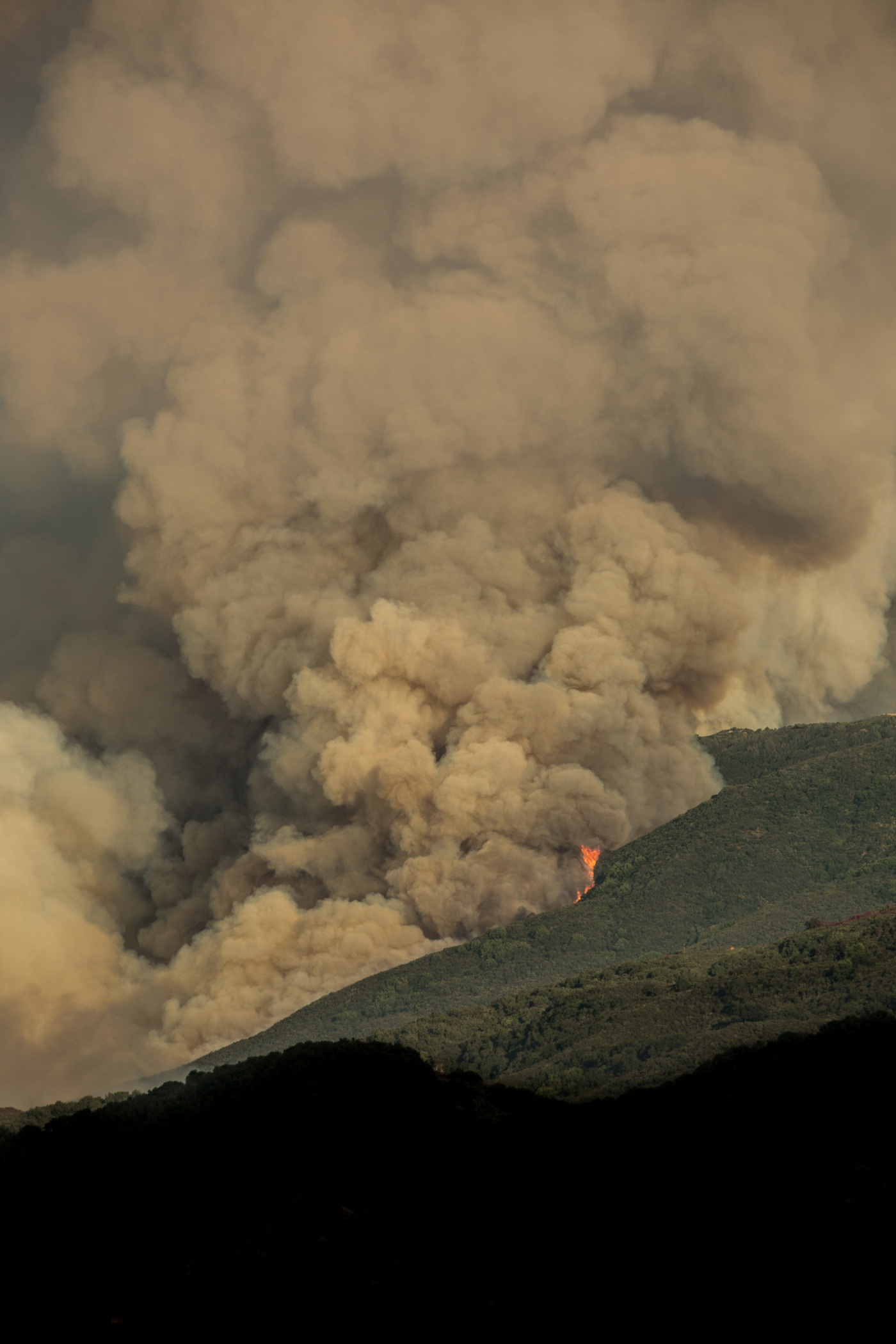 Dark, billowing late afternoon smoke, officially named the Whittier Fire, burns in the coastal mountains, creating an eerie scene on July 8, 2017, near Santa Ynez, California. The 5,400 acre blaze began as a car fire on Highway 154 near Cachuma Lake and quickly spread over the mountains toward the ranches and community of West Goleta. (GEORGE ROSE/GETTY IMAGES)

While most of the 30-acre Circle V Ranch Camp escaped serious damage — stopping at the 8-foot-high, 5-foot-wide handmade redwood cross of the outdoor chapel — the fire did engulf the craft shack and health office cabins beyond the dining lodge. But it was the water treatment facility and pipes that sustained the most harm.

Still, the Society of St. Vincent de Paul of Los Angeles, which has operated a summer camp since 1945, hoped to open Circle V last summer. But a mudslide on Jan. 9, 2018 — the same day mudslides killed 21 people in Montecito below Santa Barbara — made that impossible.

Plans now call for an abbreviated four six-days-and-five-nights sessions to start July 12 and end in August. And like always, many of these city campers will receive “camperships” or scholarships for their weeklong stays in the forest.

In the aftermath of the fire, campers from Circle V weren’t allowed to speak to media, their story untold.

Recently, two veteran campers, Dorance Herrera, 17, and his sister Diance, 14, spoke to Angelus News with their mother, Margaret, at the suburban home of an older sibling in Oxnard.

Dorance, a senior at Pacifica High School, was a 16-year-old camper in Leadership Training on July 8, 2017. Diance, now a freshman at Pacifica, was 13 years old. Going to Circle V was the highlight of their summer.

Big brother Dorance recalled the fateful day as a particularly hot, but normal one.

“The counselors rounded us up on the basketball court, but they didn’t tell us it was a fire,” Dorance recalled.

“But we kind of figured it out because of the smoke off in the distance above the tall trees. So, it was quite scary. Then we just started packing cars, getting a bunch of kids in each car. But as we were all going down the road, there was this tree that was there blocking most of us.

“Later when the Forest Service guy showed up, we decided to stay in the chuck house. I think that was our best alternative for the next three hours. But a lot of the little kids were crying, you know. So, we kept telling them everything is under control. We’re gonna be OK. And then we did all kinds of activities to get the fire out of their minds. The counselors really had it under control.” 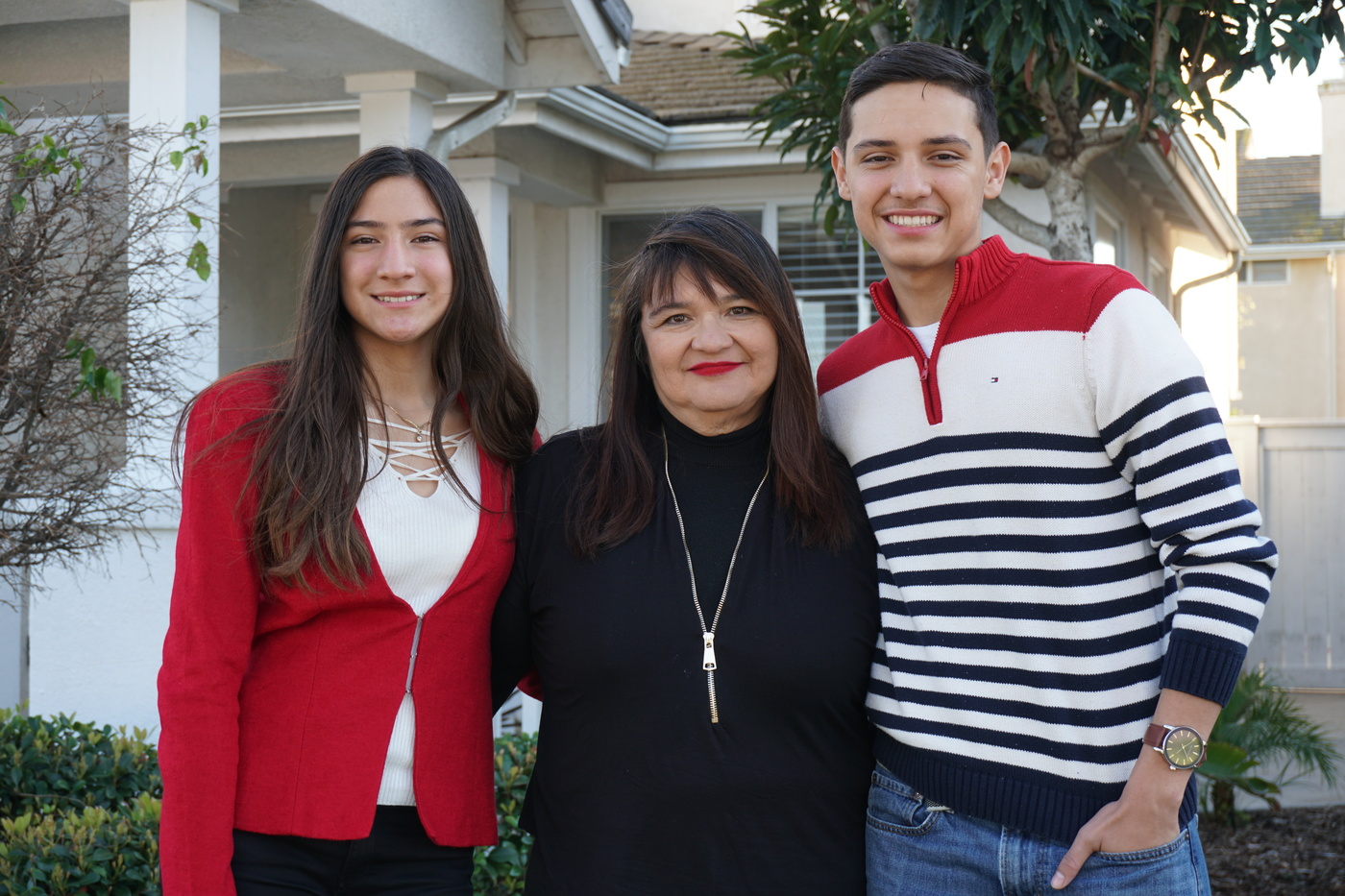 Left to right: Diance, Margaret, and Dorance Herrera. (R.W. DELLINGER)His sister, sitting between him and her mother on chairs in front of a couch, was nodding. She had just gotten home from high school.

“The girls were in a ‘general swim’ session in the pool when they got us out when the alarm when off that it was a real emergency,” she recalled. “But we thought ‘the bees were back’ like before.”

But instead of bees, the children saw huge flames of fire approaching.

“It was so warm, it felt closer than it was. And the whole sky now was covered with smoke and ash. I was in shock. I was like, ‘Whoa!’ And I was thinking, ‘Where is my brother?’ ”

Now Dorance was nodding with a serious face. “I was thinking mainly about my little sister. That was my priority. Then I saw her, and she was, like, panicking a little bit. So I tried to calm her down. And then after I took care of her, I went on to other campers. That was my job as a CILT.”

Dorance had been resting in his cabin when the alarm went off. Outside, he remembered how planes and helicopters kept circling the camp dropping water. It was “cool” to see that, he says. But he was also trying hard not to show any signs of panic from smelling smoke.

When search and rescue personnel arrived, his job changed to helping load at least eight kids into each van. Diance remembers how squashed she was in the back of one. As they started down the road a second time, there was singing, but also lots of praying.

It was hard to keep the youngest campers from crying. And she still had her bathing suit on under some clothes she’d managed to put on.

“It was hot going down,” reported her brother, who was in one of the last vans.

“I mean, the fire was literally right next to us. But I didn’t really look outside, ’cause I’m trying to get my mind off it. But I could feel the heat, of course. The door was getting hot, so I tried to get closer to the people next to me. And we were all just thinking positively and praying that we would get out. We were going slowly, making sure that we’d make it out safe. It took us maybe 15 minutes.”

Diance doesn’t remember herself praying out loud, only singing songs with others they learned at camp. “But I was thinking about God, and whatever God would do was the right thing to do,” she said.

Margaret, who coordinates the Society of St. Vincent de Paul’s charitable works in Ventura and Santa Barbara counties, turned and smiled at her daughter.

“We are Catholic, so we pray, and we thank God. Definitely, definitely,” she explained. “And I agree with Diance. This is the first time that I heard her say this. But I believe that she thought, ‘God, you have me in your hands.’ So, he took care of us and all the kids at Circle V. And it was a huge, huge fire.”

After a moment, she continued: “You know, God always has a way of doing things. Because of this experience, Dorance now is in a firefighter program and he wants to continue with that. He now wants to assist the community.”

The high school senior joined Ventura County’s explorer program four months ago. He looks forward to going on ride-alongs and shadowing firefighters. “After helping all those kids, I felt like it was my calling,” he confided.

The terrifying experience was not lost on his younger sister, either. “Fire is a very scary thing,” she said. “And I know that God is real, and he is with me. At that moment, I knew it.”

The closure of the Circle V Ranch Camp & Retreat Center as a result of the Whittier Fire and a related mudslide six months later hit camp director Ray Lopez hard. Three employees had to be laid off, counselors had to find other summer work. Tons of mud and debris had to be carted away. Cabins needed to be air-scrubbed because of smoke damage.

Cleanup so far has cost $400,000 alone. And getting permits to lay new pipes and fix other damage has taken months.

And then there’s the loss of steady income for the camp from groups like Kairos and other organizations holding retreats during the rest of the year. While insurance claims are still being settled, the estimated business loss so far comes to $1.5 million.

But Lopez believes what the closure of Circle V has meant to urban campers, as well as counselors and staff, can’t be calculated. “I get calls and emails from parents. They miss it,” he told Angelus News. “I’ve realized more than ever what an important role Circle V and the camp program plays in the lives of over 1,000 young people every summer.” 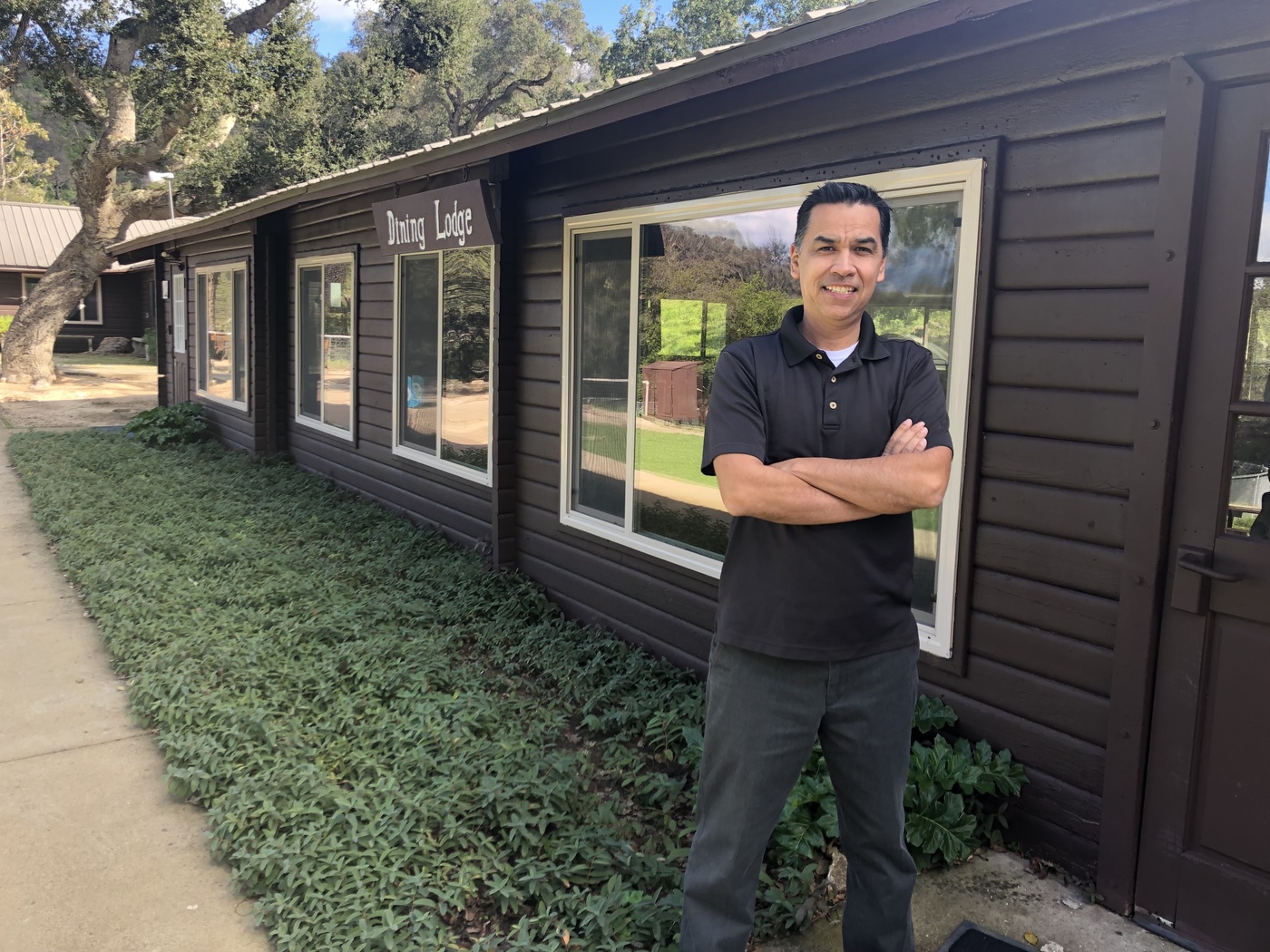 Lopez credits the camp’s success to the group of counselors that went “beyond the call of duty” when faced with potentially deadly disaster.

“Many kids who come to camp year-in and year-out since they’re 7 wait all year to go to camp. For many it’s their vacation for the summer. You know, they’re not going many places. And so, camp is their second home. And even for the staff and for me and my family, that second home was in jeopardy.

“Not the physical buildings, but what the camp brings to their lives,” he added. “The camp does so much, not only for the campers, but even for the staff and for my family. All the lessons you learn, the sense of family and the sense of being outdoors for at least a week in the summer. It’s just incredible.”

While safety from wildfires has always been the top priority at Circle V, more than a mile into thick woods, the Whittier Fire has prompted new improvements, including vegetation management, better shelter-in-place procedures, a new generator, air respirators, and adding fire-resistant paint to the damaged lodge.

“But in the end, it’s about our relationship with the U.S. Forest Service and fire marshal, which we’ve always had, and trying to find best practices for mitigating wildfires,” he said. “We’re focused on making sure that this camp can mitigate those future fires if they were to happen again. As a parent with two sons in camp and as camp director — and I’m here the entire summer — that’s at the top of my list.”

Lopez says it amazing how green Circle V looks just 19 months after the Whittier Fire, especially with all the rain this winter. “It’s incredible,” he said with a chuckle.

“We’re excited to get back to summer camp. The St. Vincent de Paul Society is really focused and committed to reopening this July.”

The Believe to Achieve Youth Program is Coming to SVdPLA!
July 20, 2021

Frederic Ozanam: On the Path to Sainthood
June 4, 2021
Go to Top